Obesity rates may show signs of leveling off, but it looks like America’s major restaurant chains are doing everything possible to reverse the trend, according to the nonprofit Center for Science in the Public Interest. The group unveils the latest "winners" of its Xtreme Eating Awards in the current issue of its Nutrition Action Healthletter.

"It's as if IHOP, The Cheesecake Factory, Maggiano's Little Italy, and other major restaurant chains are scientifically engineering these extreme meals with the express purpose of promoting obesity, diabetes, and heart disease," said CSPI executive director Michael F. Jacobson. "You'd think that the size of their profits depended on their increasing the size of your pants." 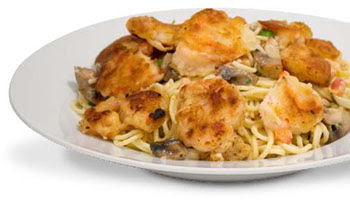 One might think that the Bistro Shrimp Pasta from The Cheesecake Factory is one of the less fattening things on the menu, what with its shrimp, mushrooms, tomato, and arugula. It actually has more calories than any other entrée (at 3,120), along with 89 grams of saturated fat (enough to keep your arteries busy from Monday morning to noon on Friday, says CSPI). It's the nutritional equivalent of three orders of Olive Garden's Lasagna Classico plus an order of Tiramisu. [Photo by Jorge Bach of the CSPI]
Posted by Roger Owen Green at 9:30 AM