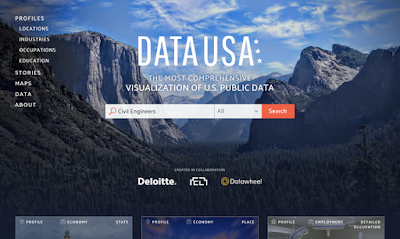 A team comprised of economists, data scientists, designers, researchers and business executives, worked for over a year with input from policymakers, government officials and everyday citizens to develop Data USA, the most comprehensive website and visualization engine of public US Government data. Data USA tells millions of stories about America. Through advanced data analytics and visualization, it tells stories about: places in America—towns, cities and states; occupations, from teachers to welders to web developers; industries--where they are thriving, where they are declining and their interconnectedness to each other; and education and skills, from where is the best place to live if you’re a computer science major to the key skills needed to be an accountant.

Data USA puts public US Government data in your hands. Instead of searching through multiple data sources that are often incomplete and difficult to access, you can simply point to Data USA to answer your questions. Data USA provides an open, easy-to-use platform that turns data into knowledge. It allows millions of people to conduct their own analyses and create their own stories about America – its people, places, industries, skill sets and educational institutions. Ultimately, accelerating society’s ability to learn and better understand itself.

The site was referenced in the New York Times in April 2016.
Posted by Roger Owen Green at 12:45 PM