Debt in America: An Interactive Map 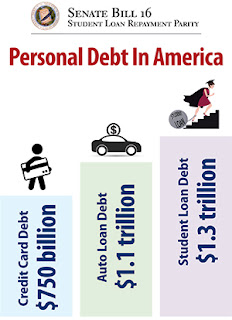 Credit can be a lifeline during emergencies and a bridge to education and homeownership. But debt—which can stem from credit or unpaid bills—often burdens families and communities and exacerbates wealth inequality. This map shows the geography of debt in America at the national, state, and county levels. How does your community compare?

This dashboard contains 2016 data derived from a random sample of deidentified, consumer-level records from a major credit bureau, as well as estimates from summary tables of the US Census Bureau’s American Community Survey (2015 or 2011–15).

We define the nonwhite population as those who are African American, Hispanic, Asian or Pacific Islander, American Indian or Alaska Native, another race, or multiracial.

Debt in collections includes past-due credit lines that have been closed and charged-off on their books as well as unpaid bills reported to the credit bureaus that the creditor is attempting to collect. For example, credit card accounts enter collections status once they are 180 days past due.
Posted by Roger Owen Green at 11:30 AM