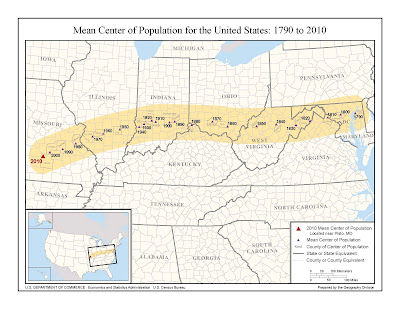 The U.S. mean center of population, as of April 1, 2010, is near Plato, Mo., an incorporated village in Texas County. The U.S. Census Bureau calculated this point as the place where an imaginary, flat, weightless and rigid map of the United States would balance perfectly if all 308,745,538 residents counted in the 2010 Census were of identical weight.

Ever since Chestertown, Md., was determined to be the center of population after the first census was conducted in 1790, the center of population has told the story of America, illustrating how we've grown as a nation. It follows a trail across the country ─ across Maryland, Virginia, West Virginia, Ohio, Kentucky, Indiana and Missouri ─ that reflects our history of settling the frontier, manifest destiny, waves of immigration and regional migration.

The Census Bureau will install a commemorative "geodetic control mark" at a site near the official coordinates during a dedication ceremony in April 2011. This survey disc will be used by satellites and land surveyors to conduct scientific surveys to generate precise position data that serve as the foundation for accurate mapping and charting in America.

The Mean Center of Population

37.517534 N, 92.173096 W
Coordinates (latitude, longitude) in decimal degrees of the 2010 mean center of population and the most western and southern point in our nation's history, as well as the most southerly movement from the previous decade.

2.7
Distance in miles from the center of population coordinates to Plato, Mo., the nearest incorporated municipality and nearest place for which the Census Bureau provides data.

Historical Path of the Mean Center of Population

4
Number of times the mean center of population has been placed in Missouri:
1980-2010.

1870
The U.S. census with the most northerly movement of the center of population from the previous decade ─ 44 miles from Beaver, Ohio, to Hillsboro, Ohio.

1860
The U.S. census with the largest increase in distance of the mean center of population from the previous decade ─ the 80.4 miles from Elizabeth, W.Va., to Beaver, Ohio, as well as the most westerly movement from the prior census.

1920
The U.S. census with the smallest increase in distance of the mean center of population from the previous decade ─ from downtown Bloomington, Ind., to a spot 9.7 miles to the northwest.
Posted by Roger Owen Green at 12:27 PM