Analysis of County Boundary Differences Between 2000 and 2010 Census Geographies

Without doubt, data from the 2010 Decennial Census will show changes in the size, composition and distribution of the population in New York State compared to those same indicators from the 2000 Census. These changes will occur at all levels—county, towns, cities and places, tracts, block groups and blocks. In addition to changes in counts of population and housing units, as well as age, sex and racial groupings, there will be changes to the geographies associated with those levels. 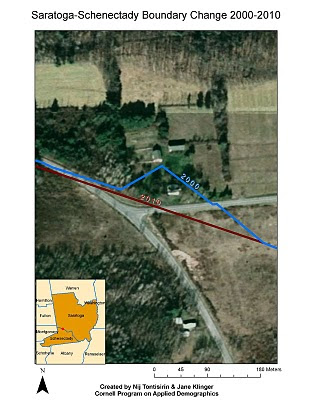 While it is common practice to examine the population and housing changes amongst the administrative units under our respective purviews, we are less familiar with examining the changes in the spatial extent and composition of those same administrative units and component geographies (i.e. tracts, block groups, blocks). Consequently, census geographies have been of less concern. Yet we all know that changes in counts may be a function of both population dynamics and changes in redrawn boundaries that enlarge, shrink or reshape the county, town, city, and so forth. Failure to consider that geographies have changed means that when we compare population and housing changes across time, we are assuming that the spatial units have remained constant. Frequently this is an erroneous assumption which can lead to bad analysis and interpretation.

The purpose of this analysis of boundary differences is to examine the extent to which the changes we observe when comparing data from the 2000 Decennial Census to the 2010 Decennial could be a function of changes in geographies as well as a function of natural increase/decrease and net migration. By examining these boundary changes we establish a firmer basis for asserting that the changes (1) are due entirely to the demographic forces of natural increase/decrease and net migration or (2) are partly due entirely to boundary changes as well, or (3) are due to both.

There are two main reasons for raising the importance of boundary changes at this time. One is that these changes affect not only the Decennial Census but the American Community Survey data products as well. The second reason is that recent advances in GIS technology easily permit such an examination and thereby remove the anxiety of not knowing whether the assumption of common geographies from time one to time two to time three are constant. 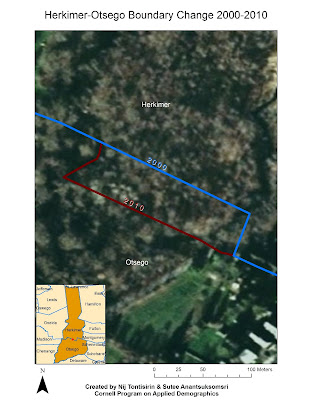 True enough that boundary changes only immediately impact comparisons between decennial censuses, but in the not too distant future, that same issue will arise for the American Community Survey (ACS) data as well. As you know, the already reported ACS data are mainly based on 2000 census geography but within two years we face the additional complication of the ACS being tagged to the 2010 census geography (i.e. changes in geographies). Even now some ACS data are based on the 2010 geographies while other ACS data are not. (For additional details, see this Census page.)

To increase our understanding of the size and structure of these boundary changes between 2000 and 2010 Census geography, the Cornell Program on Applied Demographics decided to examine the changes starting with changes in county boundaries. With the hope that this investigation will prove of some use to the Affiliates, we share our findings. This report is restricted to county boundary changes. A later report will be about sub-county boundary changes. All analyses were conducted using ArcGIS 10. Details of procedures used can be provided to interested users by writing to Joe Francis (jdf2@cornell.edu) .

Because county boundaries in New York have been relatively stable for over 70 years, we decided to begin the examination here, expecting few changes and a belief that this would be a good testing ground for working out a boundary examination and reporting procedure. To our surprise, there were 79 boundary changes detected in total at the county level. Not all 62 counties had a boundary change but several had more than one boundary difference involved. Montgomery County had the most with 11 differences. Fulton was next with 9. Orleans and Otsego each had 6. Sullivan had 5. Orange, Wyoming and Yates each had 4. Delaware and Schenectady both had 3. Albany, Chautauqua, Schuyler and Tompkins had 2. On the other hand, Allegany, Cattaraugus, Columbia, Hamilton, Herkimer, Oneida, Saratoga, Schoharie, Seneca and St. Lawrence each had 1 boundary change. Three of the observed changes involved counties along the Pennsylvania state line. 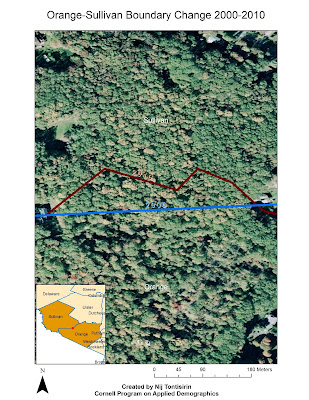 Upon examining these 2000-2010 discrepancies about half of them were long narrow slivers involving no housing units and were boundary adjustments we felt weren’t worth reporting. (If there is interest in these, we are happy to provide the details.) For this report, a decision was made to restrict our mapping and reporting to those differences involving at least an acre (4069 sq. meters) or more of land mass. This reduced the number to 42. Counties with 5 boundary differences of an acre or more included Fulton, Montgomery and Otsego. Delaware and Sullivan had 3, while Albany, Orleans and Wyoming had 2. Allegany, Cattaraugus, Hamilton, Herkimer, Oneida, Orange, Saratoga, Schenectady, Schoharie, St. Lawrence, Tioga, Washington, Wayne, and Yates had one each. Of course every boundary involves at least two counties, so more counties were involved than the above list indicates. 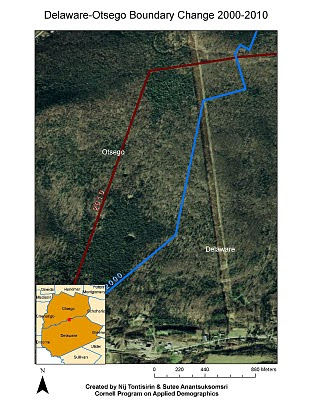 Not all of the 42 mapped boundary differences contain significant number of housing units (and therefore people), but a quick look at the jpeg files POSTED HERE will enable you to see what these boundary changes look like. Then you can decide whether or not the change is worth taking a closer look. Like any choice of a threshold cut-point, the choice of one acre or more was arbitrary but based on the idea that land area of that size could accommodate a significant housing worth looking into. In retrospect, we should have moved the threshold higher for the county boundary examination.

Because we are trying to document discrepancies that are of concern to you and report them to the Census Bureau, please let us know your concerns. 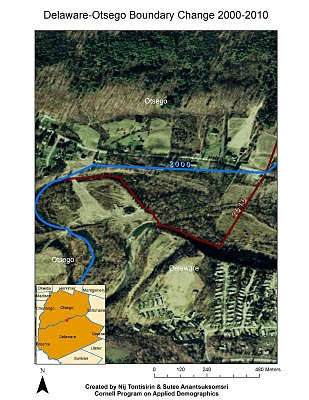 For our part at the Program on Applied Demographics, we plan to begin analysis of sub-county geographies next. We expect to see more and more significant changes at that level. Compared to counties, MCD are the next most stable administrative units. If analysis of MCS all works out, we will then move to tracts which involve more fluid dynamics.
Posted by Roger Owen Green at 10:58 AM

I was wondering how many counties in NY had no changes to their boundaries?