The Alzheimer’s Association Facts and Figures report (PDF) details the growing prevalence and escalating impact of Alzheimer’s and dementia on individuals, caregivers, families, government and the nation’s healthcare system.

Unpaid caregivers and stress
There are nearly 15 million Alzheimer’s and dementia caregivers providing 17 billion hours of unpaid care valued at $202 billion. Facts and Figures finds that caregivers not only suffer emotionally but also physically. Because of the toll of caregiving on their own health, Alzheimer’s and dementia caregivers had $7.9 billion in additional health care costs in 2010. More than 60 percent of family caregivers report high levels of stress because of the prolonged duration of caregiving and 33 percent report symptoms of depression. 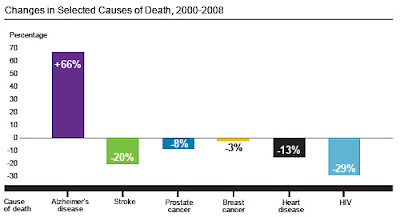 Deaths from Alzheimer's disease
Alzheimer’s is the sixth-leading cause of death in the country and the only cause of death among the top 10 in the United States that cannot be prevented, cured or even slowed. Based on mortality data from 2000-2008, death rates have declined for most major diseases while deaths from Alzheimer’s disease have risen 66 percent during the same period.
Posted by Roger Owen Green at 10:42 AM

I enjoyed your article. Please pass by and visit my project. David http://www.indiegogo.com/The-Alzheimers-Blitzkrieg?a=441422