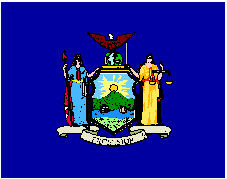 (from the www.census.gov/ronyc/www/facts.html and other resources)
New York was 2nd among states in money spent per student for elementary and secondary education.

New York State had the largest Black Alone population, and Kings County, NY ranked 4th of all counties in the country.
New York City has the longest travel time to work with an average of 38.4 minutes.
The foreign-born population in the New York Consolidated Metropolitan Statistical Area was 5.1 million.
Both New York (4th) and New Jersey (7th) were among the seven states in the country with at least a million Hispanics.
Both Bronx County, NY and Hudson County, NJ ranked 6th with 56.2% of people who speak a language other than English at home.
.
The term "The Big Apple" was coined by touring jazz musicians of the 1930s who used the slang expression "apple" for any town or city. Therefore, to play New York City is to play the big time - THE BIG APPLE.
New York was the first state to 1) preserve an historic site (Washington's Headquarters at Newburgh); 2) establish a state park (Niagara Reservation); and 3) declare land "forever wild" (the Adirondack and Catskill forest preserves) in the State Constitution.
The first railroad in America ran between Albany and Schenectady, a distance of 11 miles.
After the adoption of the Federal Constitution, New York City was chosen to be the nation's first capital and was the site of the inauguration of George Washington as President on April 30, 1789.
New York has a state muffin! The Apple Muffin was created for the Bear Road Elementary School children in North Syracuse, who were instrumental in getting the Governor to sign a bill making it the official State muffin.
.
To be continued...

The 2006 Buildings Energy Databook is available here. The site has the most up-to-date buildings energy information and is updated regularly. Data can be viewed online and complete electronic editions are also available.

The databook was developed for use within the U.S. Department of Energy's Office of Energy Efficiency and Renewable Energy. It contains current buildings-related data and has served as a valuable resource in providing consistent, citable data in a single document.

I am forever getting those stay questions about how many Mennonites, or Methodists or Mormons there are in our region. As a NYS Census Data Affiliate, I unfortunately have had to tell those making such inquiries that I know of no such data base that can get them below the national level, geographically speaking.

That has recently changed however when I became aware of the Association of Religon Data Archives website (http://www.thearda.com/). The ARDA site allows you to interactively explore the highest quality data on American and international religion using online features for generating national profiles, maps, church membership overviews, denominational heritage trees, tables, charts, and other summary reports. Over 350 data files are available for online preview and most can be downloaded for additional research.

To find county level data, select "Maps & Reports" and then the county option. From there the user can select the State and County of choice. The resultant table tells you the theology, congregations, and adherents for each religios group.
Posted by HOCCPP Dale at 8:21 AM No comments:

The state Division of Veterans Affairs has data about New York State veterans to the county level, broken down by engagement (Gulf, Vietnam, etc.). The page also provides information about legislation, memorials, and other vet-related items.
Posted by Roger Owen Green at 3:07 PM No comments:

Ethiopia Starts to Take a Census

There's news of a census that makes the massive undertaking of U.S. Census look easy. An ASSOCIATED PRESS story notes that "Ethiopia began counting its population [today], a daunting task in a country where asking personal questions is considered socially taboo but where the government and international donors sorely need more information to plan economic and social programs."

Most of the more than 100,000 census takers are schoolteachers, whose schools ended three weeks early so they could take on the task. Not only are the census takers counting how many of them there are, their ethnicity, and the languages they speak, but also religion. Public Law 94-521, prohibits the U.S. Census from asking a question about religious affiliation on a mandatory basis.

There are about 80 million Ethopians to be counted via a 47-question survey.
Posted by Roger Owen Green at 3:53 PM No comments: