How Muslims, Often Misunderstood, Are Thriving in America 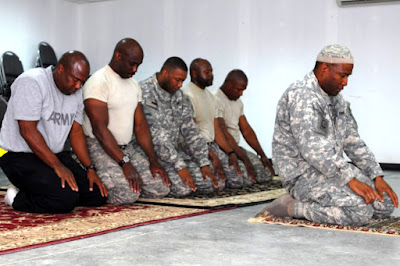 Today an estimated 3.45 million Muslims in America are living in a climate of hostility, their faith distorted by violent extremists on one end and an anti-Muslim movement on the other. The rise in animosity was stoked by fiery anti-Muslim rhetoric from conservative commentators and politicians... Trump repeatedly has described Islam as a threat, retweeting anti-Muslim videos from a British hate group and keeping his distance from the religion, like when he decided the White House, for the first time in more than two decades, would not host a dinner to mark Ramadan.

In reaction to feeling targeted, Muslims are getting political. Groups such as the Pluralism Project are supporting and training dozens of Muslim candidates in Maryland alone to run for office. A hijab-wearing Somali-American woman now sits in the House of Representatives in Minnesota; a Muslim man is running for governor of Michigan. There are two Muslims in Congress and more running in this year’s elections.

Muslims in the United States are a racially and ethnically diverse group—and a growing one, despite a recent rise in anti-Muslim hostility. From dozens of different countries and representing multiple branches of their faith, Muslims now total about 3.45 million people, or one percent of the U.S. population. With roots dating back to the 16th century, the Muslim population is currently growing faster in suburbs than in cities, especially in southern and western regions. There are now more than 2,100 mosques in the U.S., up from 962 in 1994.


Posted by Roger Owen Green at 2:17 PM No comments: