The Census Bureau has a Data and Emergency Preparedness section with Preparing for Emergencies Using Census Data, plus information about the October 2007 fires and the migration patterns in the Gulf Coast after Hurricanes Katrina and Rita.
Posted by Roger Owen Green at 10:31 AM No comments:

The U.S. Census Bureau has released a series of 34 tables on the 40 million Americans who moved between 2005 and 2006, including characteristics of movers by type of move.

The package of tables, Geographical Mobility: 2006, describes migration in the United States in 2006. Other data include the annual rate of moving, the distance moved and differences in extent and type, for example, from the Northeast to the South or from the suburbs to a principal city.

These estimates are from the Annual Social and Economic Supplement to the 2006 Current Population Survey.

Some of this year’s findings include the following:
In 2006, 39.8 million United States residents moved within the previous one-year period.
The moving rate remained statistically unchanged from 2005 at 14 percent.
Nearly half of the reasons given for moving (18.4 million) were housing related, such as wanting a bigger or smaller house.
The West had the highest moving rate (16 percent), followed by the South (15 percent), the Midwest (13 percent) and the Northeast (10 percent).
Hispanics had the highest moving rate (18 percent), followed by blacks (17 percent), Asians (14 percent) and non-Hispanic whites (12 percent).
In 2006, nearly one-third (30 percent) of all people living in renter-occupied housing units lived elsewhere a year earlier. The moving rate for people living in owner-occupied housing units was 7 percent.
For the population 16 and older, 24 percent of those who were unemployed in 2006 lived in a different place a year earlier. This compares with 14 percent of those who were employed in 2006 and 10 percent for those not in the labor force.
Most movers stayed within the same county (62 percent), while 20 percent moved from a different county within the same state; 14 percent moved from a different state and 3 percent moved from abroad.
- x -
Editors Note: Data in the report come from the Current Population Survey. Statistics from sample surveys are subject to sampling and nonsampling error. For further information on the source of the data and accuracy of the estimates, including standard errors and confidence intervals, go to Appendix G of the technical document.

"Small Business Growth: Searching for Stylized Facts" is an Office of Advocacy working paper by Brian Headd and Bruce Kirchhoff. The authors analyzed data from special tabulations of the U.S. Census Bureau’s Statistics of U.S. Businesses (SUSB) database. The SUSB data provided information on how firms started, grew, merged, declined, survived, and closed from 1992 to 2002. The authors found that growing firms are generally a constant share of the economy with a minor business cycle effect, firms with employment growth outnumber firms with employment decline, and fast growing firms in a given year tend to revert to the mean in later years.

A full copy of this report is available here in a PDF, and the research summary can be found here (PDF). Should you need further information, please feel free to contact Brian Headd at (202)
205-6533 or advocacy@sba.gov.
Posted by Roger Owen Green at 10:33 AM No comments: 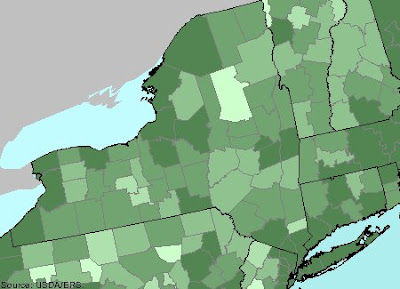 There is a mapping section that may interest data users. (The map above delineates the number of food stamp recipients by county in NYS.)

(Thanks to data detective Lisa Welch of the Syracuse-Onondaga County Planning Agency.)
Posted by Roger Owen Green at 5:53 AM No comments:

Last week, while some of us were waiting to be seated at a Lake George-area eatery, I got into a conversation about how many restaurants and retailers limit the use of the credit cards that they accept, creating minimum charges and prohibiting tips from being included, in violation of the agreement they have with the companies. I thought I had written about this, and I had, on my work blog here, starting about halfway down.
Posted by Roger Owen Green at 6:09 AM 1 comment:

The Economic Census is Coming!

In December 2007, businesses across the country will receive 2007 Economic Census forms from the U.S. Census Bureau. Federal Reserve Board Chairman Ben Bernanke has called this census "indispensable to understanding America's economy."
Taken every five years, the Economic Census "assures the accuracy of the statistics we rely on for sound economic policy and for successful business planning," said Bernanke.
There are a lot of interesting facts from the last Economic Census, available at business.census.gov. Examples there illustrate how the data are used by local businesses for marketing and planning, as well as by government agencies and researchers.

Promote the Economic Census. Go here.
Posted by Roger Owen Green at 10:25 AM No comments:

Joe Salvo, Sr. is a long-time data detective, as director of the population division of the New York City Department of City Planning in Manhattan.
Posted by Roger Owen Green at 12:37 PM 1 comment:

The Rockefeller Institute has updated an earlier report on spending for children in the American states. The new report presents data for 1992, 1998, 2003, and 2004 on state and local government expenditures in major programs designed for children or in which children are the main beneficiaries.

The report finds that state and local governments spent $467 billion of their own-source funds on major programs for children in fiscal year 2004. About 9 out of 10 of all dollars spent on children went to K-12 education. The remaining funds supported health programs and a category of expenditures encompassing a variety of nonhealth, noneducation programs (including TANF/AFDC, foster child and other child welfare services, child care, and child support enforcement).

Real (inflation-adjusted) spending per child by state and local governments increased by 34 percent between 1992 and 2004. The fastest growing expenditure during this period in the area of health, which nearly doubled in real per-pupil terms. TANF/AFDC expenditures declined between 1992 and 2004, while other social service programs grew.

States varied greatly in their levels of spending. Total per child spending ranged from $9,297 in New Jersey down to $3,699 in Utah.

Future reports will examine the relationship at the state level between state spending for children and state fiscal capacity and the racial composition of persons living in the state. The Institute website will also soon make available the data and state profiles produced from of the data.

The research has been supported by the Annie E. Casey Foundation
Posted by Roger Owen Green at 11:40 AM No comments:

Where Does My Gasoline Come From?

The United States consumes over 20 million barrels (840 million gallons) of petroleum products each day, almost half of it in the form of gasoline used in over 200 million motor vehicles with combined travel over 7 billion miles per day.

Can I tell which country or State the gasoline at my local station comes from?

The Energy Information Administration (EIA) cannot definitively say where gasoline at a given station originated since EIA does not collect data on the source of the gasoline sold at retail outlets.

Much more information here.
Posted by Roger Owen Green at 6:00 AM No comments:

"RANDOM.ORG offers true random numbers to anyone on the Internet. The randomness comes from atmospheric noise, which for many purposes is better than the pseudo-random number algorithms typically used in computer programs. People use the numbers to run lotteries, draws and sweepstakes and for their games and gambling sites. Scientists use them for random sampling and as input to modelling and simulation applications. Artists use them to make art and music. The service has been operating since 1998 and was built and is being maintained by Mads Haahr who is a Lecturer in the School of Computer Science and Statistics at Trinity College, Dublin in Ireland."

It includes everything from a Coin Flipper to a Dice Roller (useful if you don't actually have the dice you need for a game) to an Integer Generator up to 10,000 numbers, with values determined by the user, limits ±1,000,000,000. A Sequence Generator is the same as the Integer Generator except it eliminates duplicates. And there's a lot more.
Posted by Roger Owen Green at 5:20 AM No comments:

If you’ve ever used a service like InfoUSA or ZapData , you know how helpful it can be to generate a list of competitors or B2B prospects based on specific criteria. You also know how expensive it can be.

The Small Business Administration, it turns out, keeps tabs on a large group of businesses and provides access to these records at this site. Use the Dynamic Small Business Search site to bring up a list of businesses by state, county, NAICS code, ownership demographic, and all manner of other criteria.

These are companies that have shown interest in contracting with the government, so industry coverage will lean toward service and manufacturing. And not every company will be included, of course. Still, when the other option is a fistful of money, this company research tool isn’t too bad.
Posted by Roger Owen Green at 4:48 AM No comments:

Found one of those data generating databases ZIPskinny. It is, from a cursory glance, bogus. Here are some results:
The Top 100 ZIP Codes lists suggests that there are 69 places where the percentage of the population over the age of 15 which is currently married is 100%, that there are over 100 places with 100% high school graduates, 12 with 100% 4-year college graduates, 7 with post-grad degrees, and that there are places with median ages of 12 and 85. So, if someone suggests this site to you, look elsewhere.
Posted by Roger Owen Green at 3:43 PM 1 comment:

This site provides "quick and dirty" podcasts and transcript articles on navigating legal issues. If you’ve got questions, this site has answers. Forming a business? Thinking about drug-screening your employees? Wondering about copyright on the Internet ? Learn more about the legal repercussions to these business issues, and find legal tips for your personal life, too.
Posted by Roger Owen Green at 6:04 AM No comments:

More than just a Dog and Pony show.
Posted by Roger Owen Green at 6:18 AM No comments:

Why Transit-Oriented Development And Why Now?

This colorful 24-page "picture book" lays out in easy-to-read format how shifting demographics and the changing real estate market have opened up an unprecedented window of opportunity for transit-oriented development. The book explains what TOD is and how it benefits communities.
Posted by Roger Owen Green at 5:30 AM No comments:

This report is written in response to numerous requests for war casualty statistics and lists of war dead. It provides tables, compiled by sources at the Department of Defense (DOD), indicating the number of casualties among American military personnel serving in principal wars and combat actions from the Revolutionary War through 2006.
Posted by Roger Owen Green at 5:42 AM 2 comments:

Here are some for New York State.
Posted by Roger Owen Green at 5:52 AM No comments:

Someone was looking for the percent of people who speak English by country.

I knew that one could check the individual countries in the World Almanac, but that'd be tedious. A better choice, the CIA. I also Googled and found these raw numbers and these from 1995.

Of course, these are often estimates and this article, unlike anything else I came across, suggests that there are more speakers of English in India than in the US. I suppose it depends on how one measures fluency.
Posted by Roger Owen Green at 6:19 AM No comments: