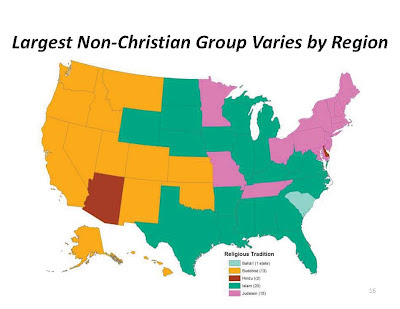 This study, designed and carried out by the Association of Statisticians of American Religious Bodies (ASARB), compiled data on the number of congregations and adherents for 236 religious groups. Participants included 217 Christian denominations, associations, or communions (including Latter-day Saints, Messianic Jews, and Unitarian/Universalist groups); counts of Jain, Shinto, Sikh, Tao and National Spiritualist Association congregations, and counts of congregations and adherents from Bahá'ís, three Buddhist groupings, four Hindu groupings, four Jewish groupings, Muslims and Zoroastrians. The 236 groups reported a total of 344,894 congregations with 150,686,156 adherents, comprising 48.8 percent of the total U.S. population of 308,745,538 in 2010.

Here's further explanation. The easiest way to access the data is to go to the home page of The Association of Religion Data Archives (ARDA) website.