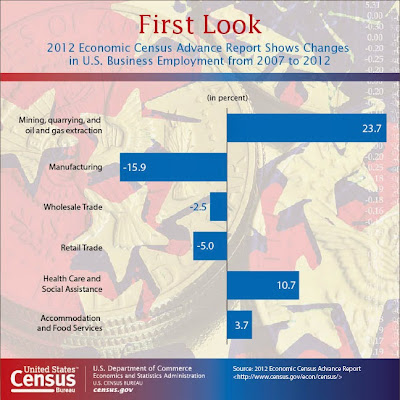 The mining, quarrying, and oil and gas extraction sector of the economy showed tremendous growth from 2007 to 2012 as the number of establishments rose by 26.4 percent, according to the 2012 Economic Census Advance Report released today by the U.S. Census Bureau.

These results provide the first comprehensive look at the U.S. economy since the 2007 recession. The economic census is the most authoritative and comprehensive source of information about U.S. businesses from the national to the local level. It provides the foundation and benchmark for gross domestic product, monthly retail sales, as well as other indicators of economic performance.

“The economic census is one of the Commerce Department’s most valuable data resources,” U.S. Secretary of Commerce Penny Pritzker said. “By providing a close-up look at millions of U.S. companies in thousands of industries, the economic census is an important tool that informs policy at the local, state and national level, and helps businesses make critical decisions that drive economic growth and job creation. At the Department of Commerce, one of the top priorities of our ‘Open for Business Agenda’ is to make our data easier to access and understand so that it can continue enabling startups, moving markets, protecting life and property, and powering both small and large businesses across the country.”

“The growth shown by the 2012 Economic Census in the mining, quarrying, and oil and gas extraction sector supports the population growth we see in parts of the Great Plains,” Census Bureau Director John H. Thompson said. “These data drive our understanding of the economy, and when considered in context of our demographic data provide insight into growth trends.”

The 2012 Economic Census Advance Report is the first in a series of industry and geographic area data products.
It contains statistics at the national level only for broad industry sectors of the economy, such as energy. New to the 2012 Economic Census, and available later this year, will be information on emerging industries, including solar, wind, geothermal and biomass electric power generation.

Among the findings in this report:

The retail trade sector had the most businesses in 2012 (nearly 1.1 million), while the utilities sector had the least (17,804).
The utilities sector achieved the highest average revenue per establishment in 2012 of more than $29 million per establishment.
The health care and social assistance sector continued to have the most employees with more than 18 million in 2012, an increase of more than 10 percent or 1.8 million people from 2007. This is the highest numerical increase of employees in any sector published in the advance report.
Wholesale trade, manufacturing, and retail trade remained the largest sectors in the U.S. economy. Wholesale trade businesses reported more than $7 trillion in receipts in 2012. This was an increase of approximately 10 percent from the $6.5 trillion reported in 2007.
Among the service-related sectors, accommodation and food services sector reported the lowest payroll per employee in 2012 ($16,374).
Data from the 2012 Economic Census are available today in .pdf form; tomorrow they will be accessible via the Census Bureau’s American FactFinder data access tool.

Due to technical reasons, the 2012 Economic Census Advance Report excludes data for the construction (NAICS 23) and the management of companies and enterprises (NAICS 55) sectors. Data for these sectors will be included in later reports.

About the Economic Census

The economic census is conducted every five years and provides a comprehensive and detailed profile of the U.S. economy, covering millions of businesses representing more than 1,000 industries and providing unique portraits of American industries and local communities.

These statistics are preliminary and are subject to change; they will be superseded by statistics released in later data files. Includes only establishments of firms with payroll. Definition of paid employees varies among North American Industry Classification System sectors. Data based on the 2012 and 2007 economic censuses.