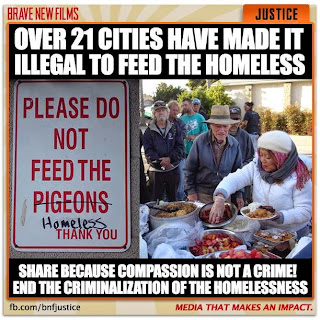 If you don't have a place to live, getting enough to eat clearly may be a struggle. And since homelessness in the U.S. isn't going away and is even rising in some cities, more charitable groups and individuals have been stepping up the past few years to share food with these vulnerable folks in their communities.

But just as more people reach out to help, cities are biting back at those hands feeding the homeless.

According to a report released Monday by the National Coalition for the Homeless, 21 cities have passed measures aimed at restricting the people who feed the homeless since January 2013. In that same time, similar legislation was introduced in more than 10 cities. Combined, these measures represent a 47 percent increase in the number of cities that have passed or introduced legislation to restrict food sharing since the coalition last counted in 2010.

8 Ways Being Poor Is Wildly Expensive in America
Posted by Roger Owen Green at 9:53 AM